Metal hydrides form a large variety of compounds with diverse structures, bonding types, and chemical properties. While some of these hydrides are only of purely academic interest – others are used on a large industrial scale. The industrial use of hydrides has been growing over the last decades and Albemarle has acquired broad know-how in the manufacture and handling of commercial quantities.

A good review on the variety of hydrides is given in an article in Ullmann’s Encyclopedia of Industrial Chemistry1.

At high temperatures (600 - 1000 °C), calcium hydride is a very strong reducing agent capable of reducing many metal oxides to pure metals. It is often used as a very efficient drying agent for organic solvents and gases. Mostly inert in combination with organic substances at normal temperatures, and being a rather weak condensation agent, calcium hydride can be used for drying ketones, esters, amines, halogenated hydrocarbons, higher alcohols, and phenols. CaH2 can be used as a hydrogen source because it is a hydrogen storage easy to transport. Another field of application is the determination of the water content in diesel fuel or kerosene. CaH2 is also used to determine the water content in plastic granules.

Mixed with oxidizing agents, HfH2 is used as a constituent part in compositions for flares, fuzes, and combustion charges in pyrotechnics. HfH2 will also be used as an alloying constituent in powder metallurgy.

Lithium forms ionic hydrides because of the strong electropositive character of the cation. In general they are not used as reducing agents but as strong bases in organic chemistry. Lithium hydride is used in limited quantities to manufacture high-purified monosilane and as a hydrogen source for various purposes.

TiH2 is applied in airbag igniter mixtures. TiH2 increases coercivity when used for the production of AlNiCo, FeNiCoAlCu, and Ticonal sintered magnets. It is also used in the production of Ti alloys and semi-finished sintered products, both as a deoxidizing agent and for the absorption of carbon in powder metallurgy. Other applications are soldering ceramics or glass to metals, and titanium hydrides representing a hydrogen source for foaming metals.

Mixed with oxidizing agents ZrH2 will be used as a constituent part in compositions for flares, fuzes and combustion charges in pyrotechnics. As a binder or brazing component for grinding agents, carbides, ceramics, and metal in abrasive wheels and polishing disks. ZrH2 is also applicable as a hydrogen source for foaming of metals.For the production of highly effective getters and as an alloying constituent part ZrH2 will be used in the powder metallurgy

Albemarle is the main supplier of the most powerful and versatile complex metal hydride for reductions – Lithium Aluminum Hydride. 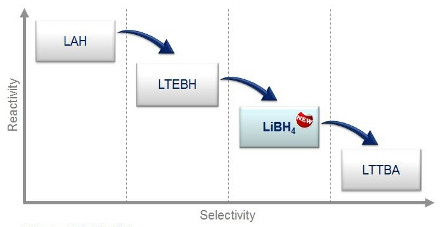 Please let us know if you need any technical support concerning the workup procedure of lithium aluminum hydride. Our expert team will be pleased to support you.